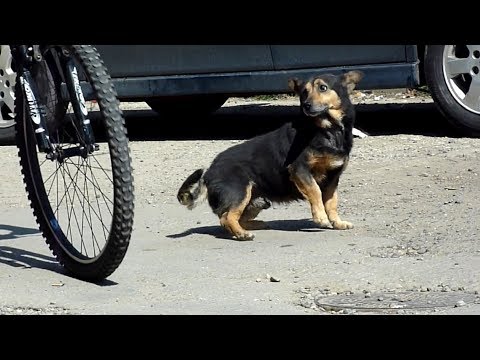 This homeless dog living in a cardboard box on the streets was rescued by Howl Of A Dog organization and this is an update rescue video celebrating 4 years since he was adopted.
Buzu spent his days sleeping in his little “shelter” or wandering around the streets longing for attention and food scraps. We asked passers-by and people in that neighborhood, trying to get more details about Buzu and if he had an owner. All we managed to find out was that he was a stray dog and had been living in that area for more than a year. When we returned later, the old cushion was no longer inside the box. After so much time on the streets he seemed in a way resigned to his fate, to his life of unending loneliness. His fur was riddled with fleas and had patches of hair missing on his neck, back and tail. Deprived of medical care on the streets, his skin problems aggravated and became chronic. We had him put on specific medication (additionally to his skin issues, he also suffered from an ear infection) and received medicated baths regularly, but the fur never grew back on the affected areas. His teeth were extremely torn, due to improper food, such as bones that he most likely ate when he was homeless. Buzu spent one year in our care at Howl Of A Dog and then was adopted by a wonderful family from England. More details and photos of Buzu are available here: https://www.howlofadog.org/buzu-adopted-in-england/
Thank you Emma for adopting Buzu and taking such good care of him!
Many thanks to all our Howl Of A Dog supporters for helping us make happy endings like Buzu’s possible. To help us save more animals in need please visit: https://www.howlofadog.org
Donate: https://www.howlofadog.org/make-a-don…
Email: contact@howlofadog.org Facebook: https://www.facebook.com/HowlOfADog Twitter: https://twitter.com/HowlOfADog Instagram: https://www.instagram.com/howlofadog #HowlOfADog #DogRescue #AnimalRescue —————-
Howl Of A Dog is a small nonprofit animal rescue organization located in Romania. Our commitment is to rescue abandoned, neglected and abused dogs from the streets or from overcrowded public shelters and to find them suitable loving forever homes. HOWL OF A DOG organization Registration Number 33570458

Group of Indian pariah dogs delighted play in my village

Tips for Staying in Hotels with Cats